Skip to Content
Wednesday, June 21, 2017 — TORONTO – When the Toronto Argonauts kick-off a new era of Argos Football at BMO Field this Sunday against the Hamilton Tiger-Cats, fans will enjoy an even better gameday experience that will feature new gameday elements and the return of fan favourites, including pre-game tailgating and the Shipyard.

The popular Shipyard is joining forces with tailgating to create the ultimate pre-game party for fans. Tailgating at the Shipyard will be held at the Ontario Place parking lot, opening four hours prior to kickoff. Four dollar beers and drinks will be ice cold, food trucks will be serving a variety of food, and of course, fans who are tailgating are encouraged to bring their own BBQs to prepare their perfect pre-game meals. Tailgate passes are $30 and can be purchased at https://www.argonauts.ca/tailgate-parking-passes/. Fans who are planning to enter the Shipyard on foot can do so for no charge as long as they have a game ticket.

Inside the stadium there are several additions aimed to make fans of all ages be a part of the game. Great tunes to get the crowd going will now come from a DJ booth right in the stands in the south end zone, taking music and atmosphere throughout the stadium.

In the opposite end of the stadium, the North End Zone patio will open 90 minutes before kickoff where fans can enjoy food and drinks with a variety of food trucks serving hot food.

Throughout the concourse, kids attending the game can get their faces painted Double Blue, or have their picture taken in one of their favourite player’s uniform.

On the field and in between plays, fans will be entertained by the Argos Cheerleaders and stunt dancers performing electric routines. They will be complimented by the new A-Team – a group of freestyle street dancers who will perform at various times throughout the game.

The 416 Beats drumline will once again be at every Argos gameday, playing throughout the stadium, just outside the stadium, and at the Shipyard.

And not forgetting our littlest of fans at every 4:00pm home game, kids enrolled in the Argos Kids’ Club are invited to come onto the field after the game and meet their favourite players. Parents can sign their kids up for the Kids’ Club by visiting https://www.argonauts.ca/kidsclub/.

Tickets for the home opener can be purchased at Argonauts.ca. For every ticket purchased in June, $2 will be donated to the Pinball Clemons Foundation, helping youth right here in the Toronto community. 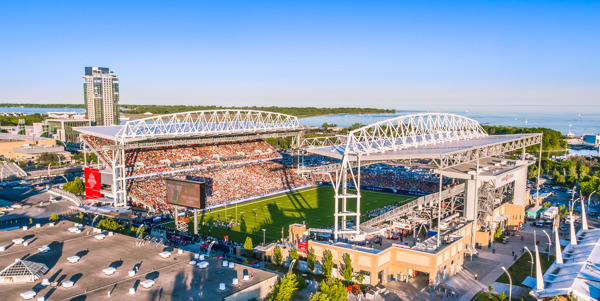