Skip to Content
Friday, May 25, 2018 — TORONTO – The Toronto Argonauts announced today that the team has signed international running back Khiry Robinson.

Robinson, 28, spent four seasons in the NFL between 2013 and 2016 with the New Orleans Saints and New York Jets before taking 2017 off to rehab a leg injury. The Midland, Texas native was signed as an undrafted free agent by the Saints in 2013 and played in 28 games over three seasons for New Orleans. With the Saints, Robinson amassed 766 yards on 186 carries and eight rushing touchdowns while adding 25 receptions for 178 yards through the air. The 6'0, 220-pound Robinson was signed by the Jets in 2016 and played in one regular-season game for New York before being placed on injured reserve and released in early 2017.

After attending a junior college in Minnesota in 2008, Robinson moved back to his home-state to attend Blinn College in Brenham, Texas. Here he would play on the same team as future Heisman Trophy winner Cam Newton, guiding the Buccaneers to a 2009 National Junior College Athletic Association national championship. The next season at Blinn saw Robinson make a positional change to safety where he finished 2010 as the team's leading tackler. Wanting to move back to running back, Robinson transferred to West Texas A&M where he played for two seasons, rushing for 1,621 yards in 2012 and setting the new single-season rushing record for the school. 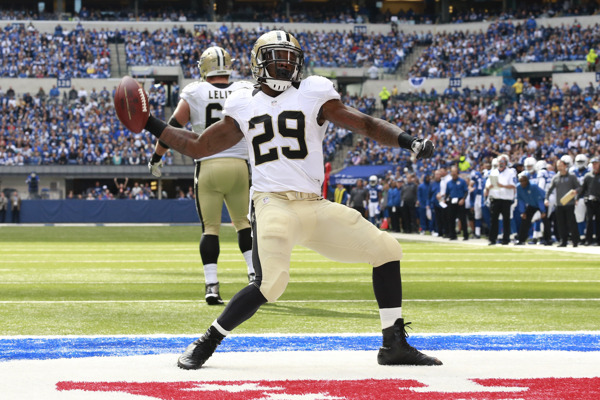